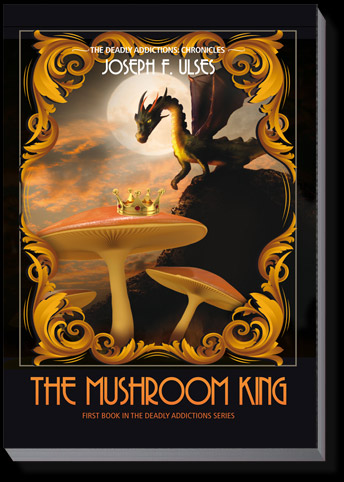 As an unspeakable evil surfaces, the only hope lies in the least likely of places! The world has become lawless, and warring clans populate the streets of every town. But there is no doubt that the Addiction Clans are the most dangerous. When Master Chong invented the five Addiction Styles and assigned them to five monks, he intended them to be used benevolently. But three of his students bastardized his teachings and have dedicated them to evil. Now they command powerful clans…and have their own agenda. With the two remaining styles, Wun Lung, the Smoking Monk, works tirelessly for the benefit of the people, all while smoking his mystical herb. And his estranged half-brother, Yul Lager, the Drunken Monk, has descended into alcoholism and physical decay. As the Mushroom King and his Clan Shitake launch a devious offense, only the estranged half-brothers have the power to battle his fearsome Addiction Style. But can Wun Lung pull Yul from the brink of self-destruction? And can the two harness their powers and thwart the Mushroom King in the most difficult battle of their lives? The path to their destiny is fraught with danger at every turn, and their adventure is made complete by a host of memorable characters, including a shape-shifting dragon! Prepare for a journey of legend!